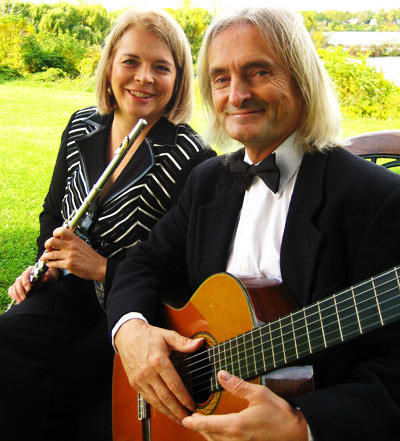 Sara Jordan started her music studies formally, with a local piano teacher, at the age of four. Her love affair with the instrument lasts to this day and she still plays the piano often, using it as a compositional tool. Sara began her flute studies at the age of fourteen. Local flute teachers and important mentors to Sara, over the years, include Eleanor Lawrie, Virginia Markson, Robert Aitken, Gordon Delamont and Carol Birtch. Sara has an affinity for the flute and has performed hundreds of engagements for corporate functions, in pit orchestras, in dining rooms and for weddings.

Sara holds a Bachelor of Music degree in the Performance of Woodwinds from University of North Texas. She owns a publishing company which allows her the luxury of composing songs and producing albums to boost literacy skills for children world-wide.

Terry Walsh, guitarist and composer, is one of Niagara's best kept secrets. Terry learned to play the guitar as a teenager, as part of a trio with his father and brother. At that time, no one could have guessed that he would surpass everyone with his special musical talent. Terry is now known as a “musician's musician” and is quite a legend among top players.

Terry's influences include Lenny Breau, Carlos Jobim, George Harrison, Jimmy Page and Andre Segovia. He has travelled and performed extensively, world-wide, including tours of England, Wales, Japan, South Africa, Canada and the USA. Terry has performed for the BBC in the U.K. and most recently was the subject of a documentary, Niagara in the 60s, in 2008.