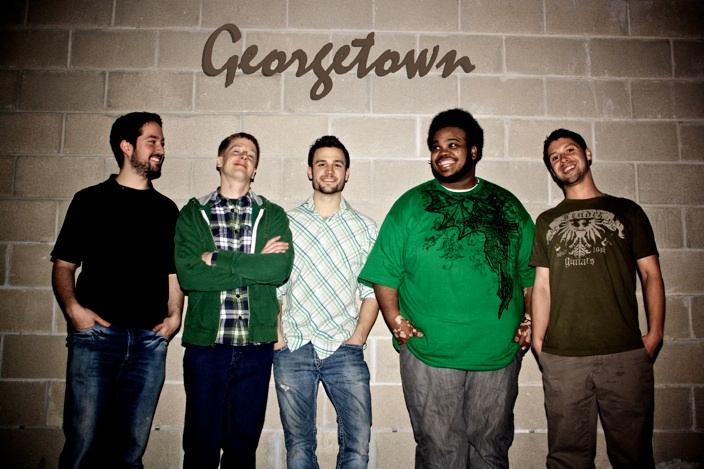 
The roots of Georgetown can be followed back to the playgrounds of Aurora, Illinois where lead vocalists Nick Martini and Danny May began their friendship. Now strapping young men, the two have been singing in harmony for over a decade. After many years in choir and a cappella groups, Nick and Danny were introduced to electric guitarist, Zach Biggus whose education and repertoire were a perfect match.

Georgetown performs regularly as a trio, quartet and now even a 5-person band! Lead singer Nick Martini utilizes his trained vocals to excite crowds with his extremely broad vocal range. From the high notes of Prince to the sultry soul of Al Green, Nick can sing it all.

Danny May shares the lead on vocals while supporting the songs with his rhythm guitar. Not only does he sing, strum and even rap, but Danny will keep the whole crowd shaking with his enthusiastic presence.

Zach Biggus received his bachelor's degree in jazz guitar and has been spicing things up ever since. With room silencing solos and finger work that is blurred by speed, Zach's electric guitar playing can only speak for itself. Christopher Keenan Grandberry a.k.a (C.J.) has been playing in many projects around the Chicago-land area. His energy behind the drum set creates the perfect recipe for a good time and a packed dance floor! C.J.'s broad range of music knowledge and his technique behind the drum set makes him an ideal player for Georgetown's rhythm section.

Adam Bockman has spent many years training, performing and teaching bass guitar. His skill level and education has brought more than just new songs, energy and focus into The Georgetown Band. From his upbeat attitude to his tantalizing bass grooves, Adam's presence will get your hips movin' and keep your feet stompin' all night long!