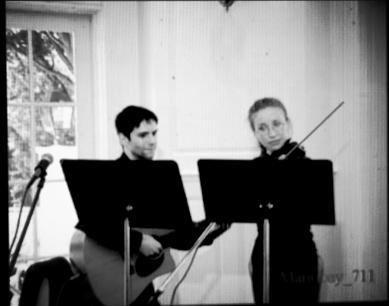 
Jessica Peyton
From a family of professional musicians and music professors, Jessica began studying violin at age 3 and piano at age 5 and has been actively pursuing her career in music ever since. Jessica holds degrees in both Music Education and Violin Performance from the Mason Gross School of the Arts at Rutgers, New Brunswick, having studied with international Paganini competition winner, Liliana Ciulei. She has also studied with Philadelphia Orchestra musicians Nancy Meinhardt, Hirono Oka and Jonathan Beiler. She believes that each teacher was able to provide her with very unique musical insights and guide her musical journey.

Jessica plays many different styles of music and has played in music videos with rapper Jay-Z and vocalist Patrice Jegou Oyelese. In March of 2004, she was chosen and performed as soloist in a Corelli concerto at the Kimmel Center. Jessica has also worked with soprano, Julianne Baird in live concert performances. In 2009, she performed Verdi Requiem at Alice Tully Hall, Lincoln Center, NYC. Internationally, Jessica has traveled to Russia, Finland, Italy, Germany, Austria, Hungary, Czech Republic and Brazil to play violin at many venues. She has also performed in a master class with violinist, Midori.

A former member of both Rutgers Symphony Orchestra and Symphony in C, Jessica is currently playing with the Garden State Philharmonic in Toms River and .

For the past 5 years, she has been teaching violin, viola and cello in Edison, New Brunswick, East Brunswick, Collingswood and Haddonfield and has found teaching to be a learning experience as well as a creative outlet into the world of music.

Jessica believes that the heart of music guides and reasons the technique. It is her belief that people can never stop learning with and through music.

Jason Stewart
A man who constructed his own musical life, Jason comes from a family of businessmen and accountants, and followed his own path to practice music. By the age of 14 Jason began playing acoustic and electric guitar, focusing mainly of folk and pop tunes. By the age of 16 he became serious about singing and drumming as well, and took part in high school musicals and choirs.

After high school Jason attended Rutgers University in New Jersey to pursue his professional music. Having a substantial background in guitar performance, music technology and music theory, Jason took to the stage playing for wedding bands in the Tri-state area. During this time he played and sang with notable musical figures such as the musical director for Sister Sledge, members of the brass section from Kool and The Gang, vocalists from The Temptations, and many others.

In 2011 Jason and Jessica decided to make the leap from hired musicians to private contractors, starting their own classical duet. Jason became enamored with the classical guitar style after hearing how complete and versatile a guitar and violin duet was. Since then they have together played for many special occasions, including wedding ceremonies, private parties, and a variety of social functions. At the moment Jason is a guitar instructor to all ages, and is a certified music educator in the state of New Jersey. Jason believes in the idea of music having a positive role in everyone's life, and inspiring everyone to create their own beauty in this world. This view he has developed from a broad view of music training from years of international studies.