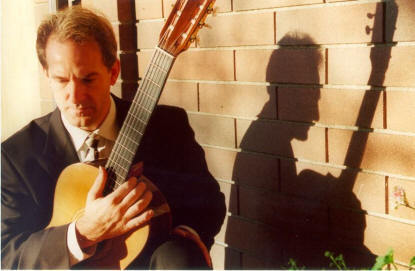 
A Warm and Engaging Artist, Mark Bushbeck is a talented and charismatic guitar player with an engaging stage presence. A public performer for over thirty years, his popular solo repertoire includes many styles from traditional classical and jazz to blues and contemporary music favorites.

A National Touring Artist Mark has performed with numerous groups or as a soloist in at least fourteen major cities in the U.S. He typically performs solo guitar at several festival concerts, private or corporate events, and weddings throughout the year. Mark has twice been a featured soloist at the Best of the Northwest Festival.

A Prodigy In high school, he was awarded a scholarship to the Symphony School of America and offered a full four-year music scholarship to a private college in Wisconsin. He chose to study music at the University of Wisconsin–Eau Claire with Dominic Spera.

A Well-Known Recording Artist Mark has performed on over a dozen albums and innumerable recording projects, including a soundtrack for a documentary prepared for PBS broadcast. Mark is very versatile and personable. He enjoys working with clients to ensure they experience what they envision for their musical tastes.