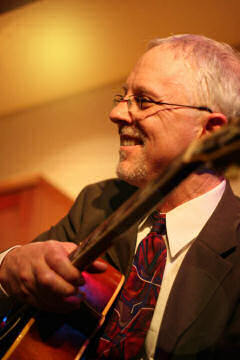 Ron's playing is thoroughly satisfying. He has all of those qualities I admire: a superb sense of swing, great melodic ideas, an understanding of the fingerboard and the many possibilities for chord shapes and solo choices - and best of all, a youthful exuberance for the guitar and it's capabilities. Plus, he's one of the nicest people you'll ever meet.

Ron Peters is, according to Just Jazz Guitar magazine, "a great jazz guitarist who has the ability to play sensitive and melodic solos, and is wonderful at developing a high level of intimacy and creativity in his playing, with unrestrained imagination." He has worked with the world-renowned Manhattan Transfer, Chevy Chase, Debby Boone, The Don Ellis Orchestra, as well as the internationally acclaimed local gypsy jazz group Pearl Django, just to name a few.

Fellow guitarist Bill Coon, of Vancouver BC, with whom he teamed up to create the award-winning (top ten NW jazz) album No Boundaries has this to say: "Ron Peters is a guitarist with a beautifully warm sound who understands the value of melody. . Ron plays swinging and engaging solos, is a superb accompanist and has a great feel no matter what style of music he plays."

An alumnus of Berklee College of Music in Boston, Ron has studied with such greats as Joe Pass, Pat Metheny, Mick Goodrick and Ted Greene.

He has numerous album credits to his name and has also been featured on many radio and TV commercials.

Ron is currently working with the Northwest Sinfonietta Jazz Ensemble, and has recently completed a new project, Equilibrium, with his group Trio Incognito (chamber swing from the best jazz musicians you've never heard of).