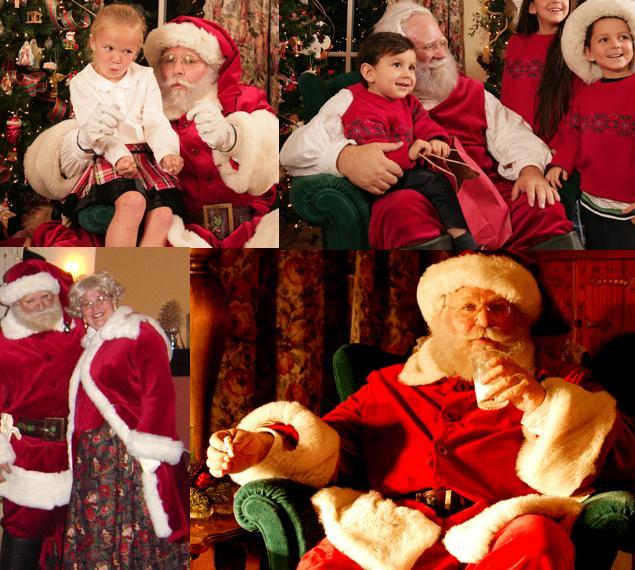 
Bring the magic to life and arrange a special visit from Santa Claus to your home or business. Santa can “Fly By” in a hurry, or even stay and share a meal. Looking for a lifetime memory for your young one? Arrange for Santa Claus to make “Midnight Commotion” at your home on Christmas Eve. Let us customize your Santa Claus experience.

The magic of Christmas is often lost in the bustle of shopping and commercialization of Santa Claus. Lines in shopping malls strip away the reason and enthusiasm for children to believe. The fake beard, the smelly old guy and the staged and badly captured photo make little impact on a family.

Holly Jolly Wally created Santa Claus in love and creativity to customize the magic of Christmas for families that want to believe. Based in Pasadena, California, Santa Claus, Wally Wirick, takes pride in being the most realistic character possible. Modeled on the classic Coca-Cola Santa, Wally is the spitting image of the jolly guy. His suit is made of the finest velvet and fur, He wears big leather boots to keep the snow off his toes. His beard is real!

Being a child's hero as Santa is an honor Wally values. He has over 30 years experience as a professional with the YMCA, the Boys and Girls Club, and presently serves as the Camp Executive Director of the official charity of the students of UCLA. a resident summer camp serving children of need called UniCamp. Santa Wally enjoys witnessing the spirit of childhood and all of the imagination that it fosters. Wife and business partner, Karen Wirick, often seen as Mrs. Claus, has twelve years of experience raising funds for camps, schools and kids' causes, and presently serves as a fundraiser for a major southland nonprofit.