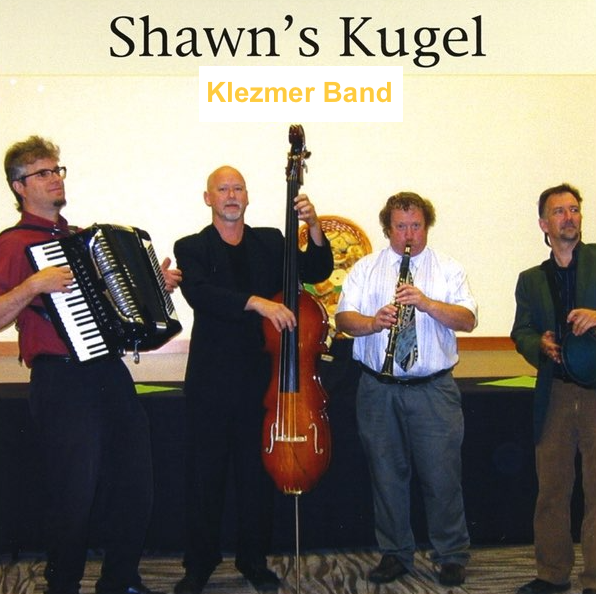 
The musicians in Shawn's Kugel have imbibed countless free drinks at wedding and mitzvah parties in the service of keeping Klezmer music vibrantly alive. Neither purists nor way-out experimenters, Shawn's Kugel plays good old fashioned Klezmer traditionals as well as they mix it up with Jazz and Worldbeat-inflected tunes. The band's music is without a trace of dilettantism: Shawn's Kugel doesn't just dabble in Jazz, they play it with expert proficiency and sublimely restrained grace, seamlessly melding it and other genres with Klezmer in a way that never sounds less than totally organic.

Shawn Weaver, also writes new tunes on request for the occasion of a celebration. In so doing he is participating in the powerful tradition, shared by all folk musics, of songs referring to or celebrating real events of genuine communal significance. Note how this is almost entirely missing from rock or pop music. When the latest boy-band sensation sing their new "girl, I love you" song, it is entirely severed of any real meaning. What girl? Which boy? When? Where? This is why songs like this are so disposable, and today's pop smash becomes tomorrow's K-Tel TV compilation offering. The most personal significance a song like than can have is if it becomes a couple's "song," (as in "they're playing our song!") but think how much weaker that significance is than the significance of a song written just for you, to be played on the occasion of your marriage, or your entry into adulthood. "Freylakh for Robert," written on this kind of commission, is just such a song. No mere work-for-hire, Weaver's composition swings and lurches and dances and loves with a life of its own. Though songs like these will never interest K-Tel, they have passed over from the realm of plain old everyday music into the realm in which music is magically personal and yet shared. A recording can capture the song, but with folk music any recording is merely those musicians playing that song once, while the song itself outlasts the performance and and even the musicians. This is the power of folk music - this is the power of Klezmer - and it is a power more covetable than chart-topping accessibility or the evocation of scholarly discussion. Simply put: Klezmer music lives.

Shawn's Kugel was formed in the 1997 and has performed all over the NorthWest in festivals and simcha's. We are considered the premier Jewish band in the Northwest and we were voted Seattle's best Jewish Band by the readers of JT News. Shawn Weaver is the leader of the band and previously played woodwinds and mandolin with the Mazeltones for 9 years. The band has released 4 CD's: "Simcha!", "Most Precious of Days" and "Finger Play" and the most recent "Odyssey".

Kugel performs not only Klezmer & Sephardic, but also contemporary Chassidic, Reggae, Jazz and some Rock & Roll. We pride ourselves on our musicianship and our ability to provide the ultimate simcha. Shawn organizes and teaches traditional dances at each performance. Shawn also writes a personal composition for some events, (As time permits) which is framed and presented to the Chosen/Kalle and or Bar/Bat.