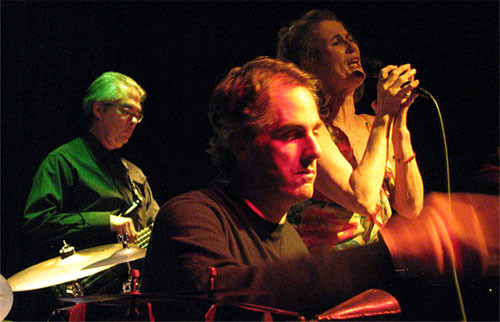 This unique band features Fred Hoadley on piano, Brian Kent on sax, Don Dieterich on drums, Rob Petersen on guitar, Dan Schmitt on bass and Susan Carr as their singer. Susan Carr sings with the best of Latin Jazz singers in the Northwest. Her commanding presents and ability to sing in Spanish, Portuguese, French and English delights her international audience. She loves to take contemporary songwriters such as Sting to Cyndi Lauper to Stevie Wonder to The Beach Boys and add a cool jazzy Latin groove to them.


WHAT THE CRITICS SAY

"She delivers her sets, carefully varied with songs from all over, qualities of assurance, delivery, and staging win through. Carr sells her songs." - Earshot Jazz Magazine

"Her voice is smooth as a good cocktail." - The Rocket


ABOUT SUSAN M. CARR
Vocalist Susan M. Carr's love affair with the sounds of Brazilian samba music was re-ignited following her lead appearance in The Carmen Miranda Show at Seattle's Bumbershoot and The Moisture Festival. With this desire to take Brazilian music to a new level, Ms. Carr assembled the talents of several world-class jazz musicians to help her blend the danceable Brazilian samba with several layers of jazz. This unique combination, supported by Carr's fervent delivery and soulful intensity, creates a sound that is sure to take the Susan Carr's Ensemble on a new course in contemporary jazz.

Susan Carr's Ensemble made their first recording debut with the CD Paixao do Brasil. A collection of smooth, well crafted tunes, Paixao do Brasil captures Carr's passionate punch-laden vocals and blends them with the perfected jazz layers that have grown to signify the Susan Carr Ensemble. Band members include: Fred Hoadley, Don Dieterich, Brian Kent, Rob Petersen and Dan Schmitt.

Performing in New York's First National Touring Company of An Inspector Calls to Ishmael Reed's The C Above High C at the Nuyorican Poets Cafe, Susan has received numerous accolades for her stunning performances on Equity stages in New York, Los Angeles and Seattle. Living in Los Angeles, Susan furthered her career in acting and singing for film and television. She is featured on the soundtrack of Living Life and as a singer on Gilmore Girls.