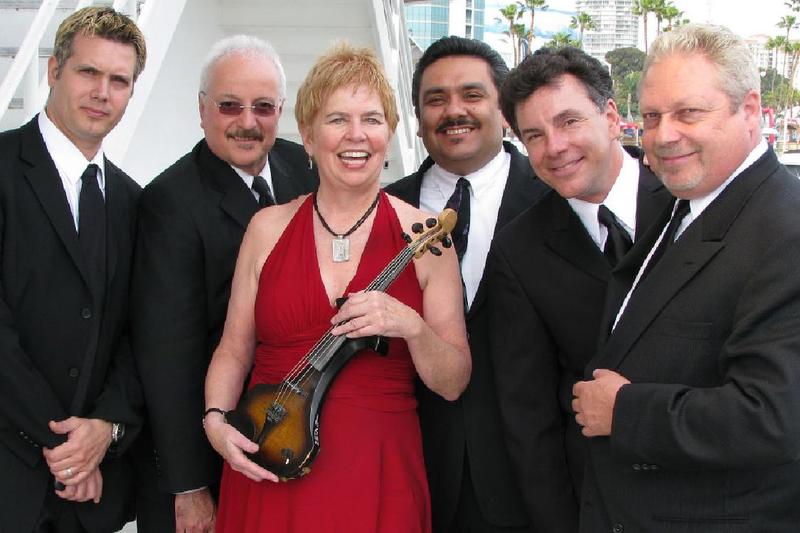 
The Susie Hansen Latin Band is a popular Los Angeles-based band playing high-energy Latin dance and American pop music. Susie Hansen plays the electric violin and is the musical director. The band's specialty is Latin music:  Salsa, Cumbia, Merengue, Bolero, Bachata, Mambo, Cha Cha Cha, Charanga, Rumba, Samba, Bossa Nova and Latin Jazz.  You will not find a better band for authentic Latin music.  For an occasion that calls for oldies, pop, rock and swing, they play a large repertoire of disco, swing, funk, classic rock, R&B, Motown, jazz standards (like Frank Sinatra), jump swing and big band.  Susie and her band will get the audience up and moving--as Susie likes to say, "We aim for the feet!"  The band is truly a crowd pleaser with its rhythmic energy and drive.  For dinner the music will be beautiful and never too loud.  For cocktail hour, the music is lively, a perfect compliment to conversation.  Their band has received many wonderful reviews, including one by Phil Elwood of the San Francisco Examiner, who describes the band this way: “It's a sizzling, swinging Salsa band. Hansen can solo as if her bow was afire."  While specializing in Latin jazz and Salsa, the band plays dance music of all types.  According to Brian McGackin of the Glendale News-Press, “I am usually hesitant to rave so dramatically about the quality of a band, but I just cannot seem to help myself. Raucously fun and upbeat, it's hard not to get up and dance."  Susie's third CD, "Representanted de la Salsa," has gotten extensive airplay across the United States and in Europe, South America and Asia.  Their single "La Salsa Nunca Se Acava" from Susie's second CD "The Salsa Never Ends" continues to be popular with dance DJs around the world.

A major attraction since she moved to Southern California 30 years ago and formed her Latin band, violinist Susie Hansen and her musicians perform an infectious blend of salsa and Latin jazz that has the audiences smiling and dancing. This year her band is celebrating their 30th anniversary with lots of prominent performances. Popular from the start, the Susie Hansen Latin Band mixes together infectious Latin rhythms with jazz improvising, vocals in both Spanish and English, recognizable standards and strong soloing from players. They play salsa, cumbia, charanga, merengue, bachata, bolero, cha cha cha and Latin jazz. The result is music that inspires dancers yet also rewards a close listen. Susie Hansen was born and raised in Chicago. Her father James Hansen played violin with the Chicago Symphony for 37 years and attended many of their concerts with her family. She had a violin lesson every Sunday with her Dad and practiced hours every day.

Having other interests and skills, Susie earning two Masters Degrees in Engineering from MIT, but music proved to be a stronger calling. Susie played classical chamber music, worked in Boston for two years performing swing, bluegrass and original string band music with Strings Attached, and then was a member of Trapezoid, a popular folk band in West Virginia. Returning to Chicago in 1980, she formed her own jazz quintet. The turning point of her musical life occurred when her quintet was playing at Taste Of Chicago, a huge festival in Grant Park. “The band playing before us was Victor Parra’s Mambo Express All-Stars,” Susie reported. “Victor stayed to hear our group, and afterwards he asked me to join his band for their regular Monday gig at the Moosehead Bar and Grill. I told him that I did not know much about mambo, but he said that I’d get it, and I’d love it. And he was right. Harmonically the music is based in jazz, which I already loved, but the Latin rhythms are just more compelling than I ever imagined. It has that drive that really hooked me on Salsa and Latin jazz.”

After moving to Southern California in 1988, Hansen sat in with jazz musicians like Billy Mitchell, John Bolivar, Sal Marquez and the dynamic charanga band Bongo Logic. She got her first break three months after arriving in LA when Cuban master drummer Francisco Aguabella invited her to join his band. “I played his trombone book on my electric viola, so I learned really fast how to transpose from bass clef!” Throughout 1988 and 1989, she was a member of several other Latin groups, bands led by Bobby Matos, Long John Oliva, Papa Conga, and Candy Sosa, and became a recognizable and important part of the local Latin music scene well before she formed her own Latin band in 1990.

The Susie Hansen Latin Band is well represented on Susie’s three recordings: Solo Flight (named by Latin Beat Magazine as one of its Top 100 Independent Latin Jazz Recordings), The Salsa Never Ends (includes “La Salsa Nunca Se Acaba” which is popular around the world), and her most recent, Representante de la Salsa. Each of these recordings features a variety of Latin dance styles and Latin jazz, especially salsa and cha-cha-cha, with the occasional bolero and merengue. Her ensemble features the masterful Daniel Castillo from Venezuela on lead vocals in Spanish and percussion, and the soulful Kaspar Abbo from London on lead vocals in English and electric guitar. Susie not only plays electric violin, but is the band’s musical director and sings both bilingual lead and background. The powerful montunomaester Joe Rotondi plays keyboards and hails from Hollywood. Bassist Brian Wright is from Colombia and supplies the heart-beat of the band. Drummer Tony Shogren’s heritage is Peruvian, and he provides the driving force of the rhythm on timbales. When they play with their bigger band, Roberto Cascante from Costa Rica joins them on percussion, David Stout on trombone, and Tim Messina on sax and flute. Some of LA’s finest and best-known Latin jazz and Salsa musicians have been long-time members of Susie’s band – percussionists Tiki Pasillas, Jimmy Branly, Joe DeLeon; bassists Rene Camacho and John Belzaguy; singers George Balmaseda and Eddie Ortiz.

The Susie Hansen Latin Band plays between 100 and 150 gigs every single year. Among some of the highpoints have been appearances at the Playboy Jazz Festival, Norfolk VA Latino Music Festival, the Toronto Jazz Festival, Fiesta Broadway, the San Jose Jazz Festival. The great Cuban singer Celia Cruz and master percussionist Giovani Hidalgo have performed with her band. Apart from the band, the violinist has had opportunities to perform with Tito Puente, Paquito D’Rivera, Orquesta Broadway, Orquesta Aragon, Vikki Carr, and Jose Rizo’s Jazz on the Latin Side All-Stars, and she particularly treasures having played with Orquesta Los Van Van both in Los Angeles and in Havana, Cuba. But the violinist’s main focus is always her own band. A crowd pleaser with its rhythmic energy and drive, the Susie Hansen Latin Band has performed before hundreds of thousands of people through the years. They appeal to a wide and enthusiastic audience with their mixture of famous and traditional salsa numbers, infectious original compositions, and Latin-style interpretations of American jazz standards. Their solos are compelling, and the dance floor is always packed!

Add DJ Services to your event.