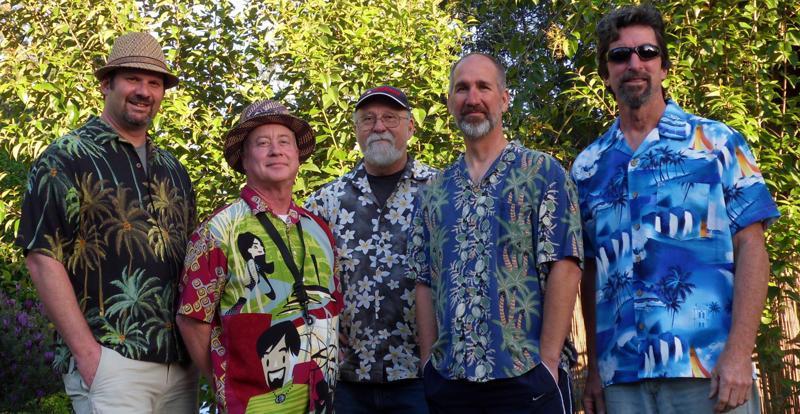 
The Pyrotones are a jazz-rock and latin-funk band. Our band features 3 composers at present though we still enjoy playing the classics of Jazz, Latin and Funk .. We have recorded 2 CDs available through CD baby and and are currently performing at wineries, jazz clubs, and restaurants in Northern California.

Sax: Rick Clifford: first interest in music was sparked by playing guitar in church in 1966. His interest soon spread to saxophone in High School playing swing, jazz and Mo' town in St. Louis. For the next ten years Rick played with a big band featuring ball room dancing styles of music. Rick came to California in 1991. He immediately hooked up with local musicians including; Volker Strifler, Willie Jordan, Eric Lindell and Animal Farm. In 1997 Rick was asked to fill saxophone duties in the Pulsators.

Guitar: Mac Beall comes from a family of musicians. Mac studied Piano from the ages of 6 to 8, then played Clarinet to the age of 13. At 20 he was introduced to Guitar. The guitar devoured him and he hasn't been seen since! Seriously folks, he started playing professionally at age 22 in original Rock bands, studied guitar under Jorge Strunz (of "Strunz and Farah") in LA and developed an interest in Jazz.

Drums: Ralph is a veteran performer of many musical styles and has performed with an array of artists in such bands as Roy Clark, Cold Blood, WBBH, King Fish, Michael Bolivar, The Chet Baker Group, The Dave Brubeck Group, The Sons of Chaplain, Pablo Cruise, Miles Davis, Tower of Power, Berlin, Norton Buffalo, and Santana. He has a BA in Music from Sonoma State University in California, and currently works in numerous pick-up situations in the Northern CA Bay Area, as well as composing for and performing with Reality Check.