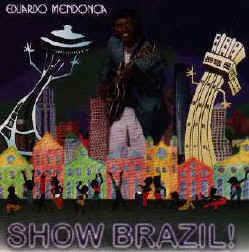 Show Brazil! consists of dancers, percussionists and instrumentalists all in full costume. Show Brazil! opens a typical performance with the percussion rhythms of Ijexá, Afro-Brazilian rhythms brought to Brazil by African slaves in the 16th Century. The music then moves into Baião, combining lively rhythms and heartfelt lyrics from the people of the Sertão (a desert region of Northeastern Brazil). Next comes Maculelê, a tradition originating from an ancient Afro-Brazilian war dance. The rhythms and songs of Maculelê reflect the invincible spirit and imagination of slaves working the sugar- cane fields in Brazil. Following Maculelê is Capoeira music. This form of music comes from a Brazilian martial art developed by 17th Century escaped African slaves. Capoeira movements are known for their acrobatic leaps and fierce playfulness. Succeeding Capoeira are the electrifying rhythms of Samba and Galope. The music of Samba-Reggae (the heart and soul of Afro-Brazilian Popular Music) concludes our show. Originating in Salvador, Samba-Reggae has become popular the world over.

Featured musical instruments include the Berimbau (a tall, bowed instrument with a gourd ), and a full array of drums and other percussion instruments (Surdo, Repinique, Cuíca, Triângulo, Pandeiro, Tamborim and Agogô).